So much (too much) happened in the past 10 days, I couldn't keep up with the blog.  I hoped to add more, but studies became more important and I was wiped out most evenings.  The final days of class were intense for me. I felt I needed to do really well  on the final test and prove that all the effort was worth it.  I ended up getting exactly the same on my written and oral tests as I had the first two tests - well, a bit better on written this time...(84%) and 90% oral.  I crossed every t and dotted every i, as it were, on the written exam, but still fell down on particles, getting only half correct - and then I forgot to answer one whole question.  Although particles in simple sentences are easy as pie, as the situation (and sentence structure) gets more complicated, so do the particles.  When I listen to an ESL adult whose native language is Spanish, even if their grammar and vocabulary are excellent, it's the english particles that often trips them up and gives them away.   I mean think about the use of "at" or "in."  Very subtle differences in their use ("I am at the hospital.  I am in the hospital." Both correct but slightly, subtly different and situational).  Anyway, I think when one masters articles in Japanese, one has mastered quite a hurdle indeed.

So there was lots of detail in my studies last week.  We also spent time learning how to give and receive - which, as you can imagine is an intricate round of verbs in Japanese.  Those verbs that have to do with who gave what to whom, how close in relationship that person is, if the subject of the sentence is the receiver or the person who gave the present, if the gift giver or receiver is a family member or a boss...all have different verbs.

In my private lessons with Sugita sensei,  I was able to go over in more detail the things that were tripping me up in other lessons.  The use of "n desu," not particularly hard grammatically, but remembering when to use it... (used as a means of explaining why something did or did not happen, it is often used as an apology attached to a verb or adjective...the use of it in a question shows surprise or sometimes disapproval towards the listener.  If the questioner uses "n desu" then you better damn well use "n desu" right back in your explanation.   Or it might not show disapproval but just exceeding interest.  But as it happens, it is such a quiet little addition to a sentence that one may not always hear it, so one has to listen for it in body language and eyebrow expression as well.

But it wasn't all hellishly hard.  I spent a wonderful Saturday in Nagoya at the amazing Nagoya Fall Matsuri with my friends.  We all ended up splitting up because the crowds were too impossible, but it was fun to hang out while we could.  The parade ends in a big battle at the main intersection, showing the fight between three prominent daimiyo to govern and rule all of Japan as Shogun after over 400 years of bloody civil wars.  Of course the final victor is Tokugawa Ieayasu.  But the street battles are wonderfully costumed and even had a dose of comic flair.  The following pics are a mixture of pictures from my camera and Ko-s camera, neither of us had a great picture of the battle scene.  Too busy watching it I guess. 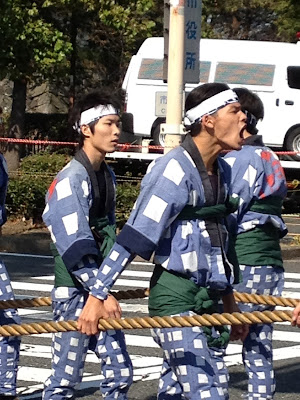 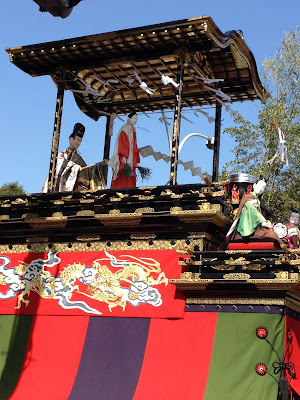 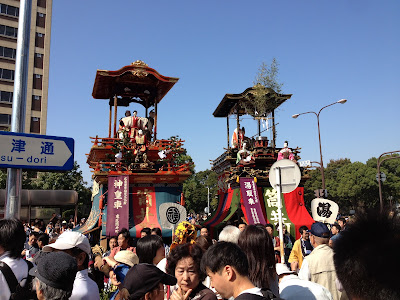 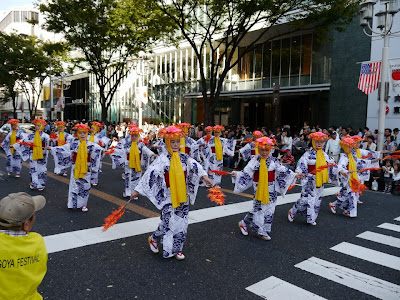 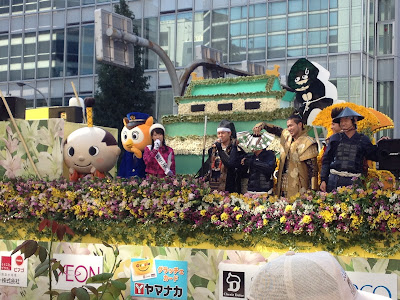 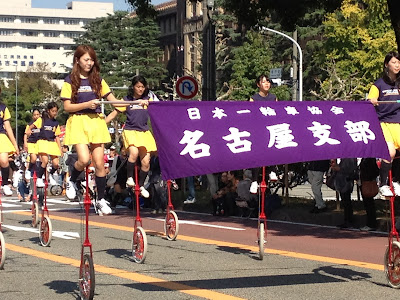 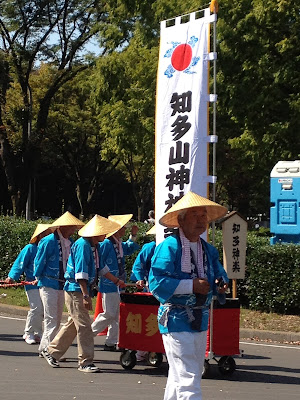 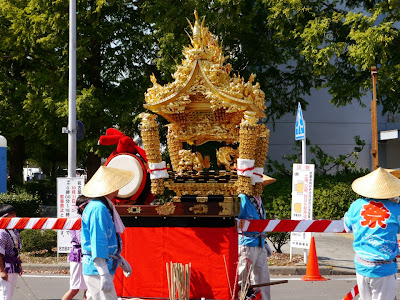 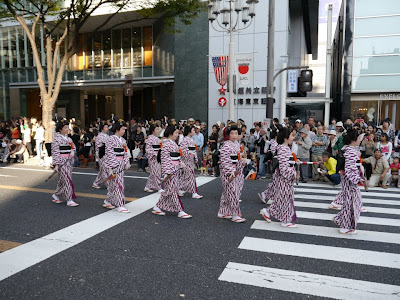 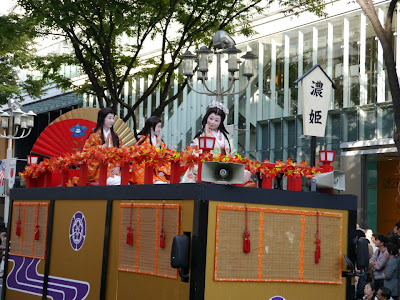 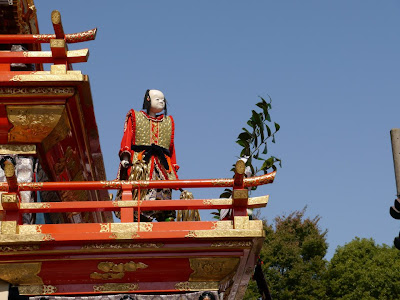 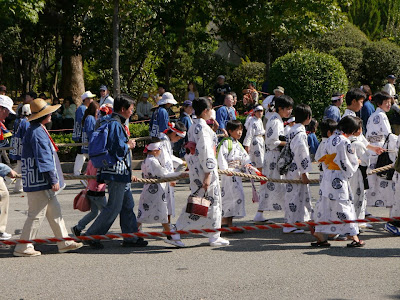 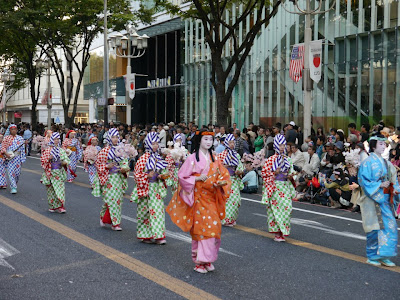 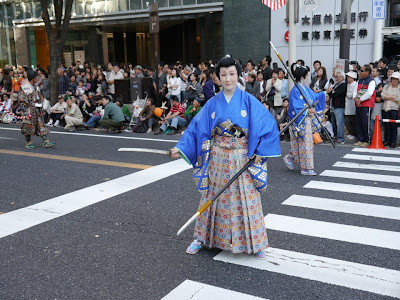 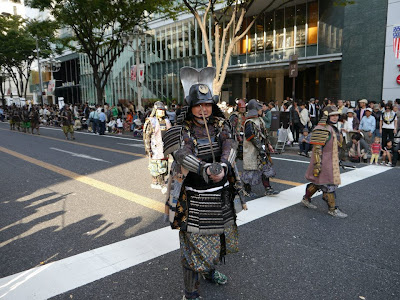 After the Matsuri, I walked along the food stands eating fresh grilled whole fish and tasting malt beer.  As I got to the stage at the end of the park, an all men's choir dressed in dark jeans, deep red blazers and blue ties were singing a Japanese song.  The conductor for these 37 men of various ages was a young, very beautiful Japanese woman.   I moved closer to hear them.  After that song they moved into their final song, Bridge Over Troubled Water.  I don't know what came over me, but I was moved to tears.  These earnest men, with their beautiful voices singing "Rike a Bridge Ovah Troubred Watah, I Wir Ray Me Down" at the top of their lungs and in such perfect harmony, (so beautifully that you could almost hear the strings that Paul Simon orchestrated for the piece)...the beauty of their effort and their struggle with the wording and final mastery of the feeling of the song, had me crying all the way through.  Luckily it was dark and the ever polite Japanese are very conscious of not ever looking directly at me, the lone caucasian woman in the park.   So my tears could flow, pretty much unnoticed.


What I love about the Japanese is this earnestness, it's a great word to describe them.  At school we learned it as まじめ majime (though it might not mean the earnestness I am describing here...) In my experience, there is nothing that is not done here without earnest effort.  At all times, in shops, in restaurants, on the street, in the school office, at the airport, whatever action is happening, the people have every good intention of making sure the task is complete and that all are satisfied.

I was reminded of this on my first trip to the grocery store this time, which was more like a Wallmart.  I couldn't find a section that had paper supplies, but knew there must be one and so asked a young mother who just happened to be shopping near me if she knew where that section was.  Despite the fact that at that very moment her toddler daughter began to scream her head off the women dragged the child and her grocery basket half way across the store; things kept dropping out of the cart, the child was screaming, the mother and I were picking up the assorted products off the floor as we walked -- all to make sure I got to the paper isle.  No matter what my protestations were, telling her I was sorry and it's O.K., I will find it, please don't worry, it's all right, etc., she continued, ever smiling at me, to complete the request.

I am outside of the culture and I don't know what might go through a person's mind who feels that they have to drop everything to help someone else; are they annoyed? Do they wish they hadn't been asked? Do they feel good about it?  Does it not bother them at all, it simply just is something one does?  I don't know.  I just know that in America someone would have said, "It's about six isles over," and left it at that.  There is something  so beautiful to me about how far people here are willing to go to help others.

And beautiful too is how 37 gentlemen could put their hearts and souls into a song whose lyrics betrayed them, but whose sentimental feeling still rang as true as a lovely bell in the autumn evening.