My Last School Day at Yamasa

Of course, Chen-san and Ro-san and I had to have a final dinner and study evening together just before the test.  It was always very hard for us to try to stay too serious for more than 30 minutes at a time.  I made dinner this time (they had treated me to dinner the night before at their apartment). 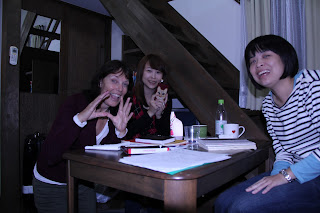 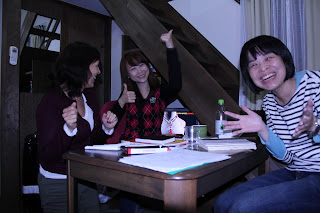 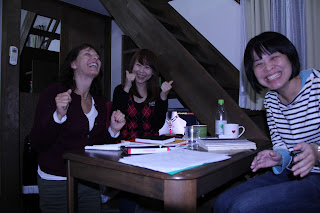 An uneasiness existed that I hadn't really felt before.  Lunch was odd - some stayed for lunch, others left.  I had to do some paperwork in the office, so missed much of the normal gathering.  When I returned to the lounge, most of the folks were finishing their lunch, deep in conversation already.  I sat amongst them, finishing my food and listening, but not really participating.  Peter finally got up and played the piano, which I  looked forward to every day.  It was Chopin again, and I went up to listen and try to sing the part that sounded like "I'm always Chasing Rainbows," a song I learned very young from a Tammy Grimes Record.  A few days before when I had recognized the little part within his music he was amazed and said he didn't know there were words to Chopin!  We laughed, and from then on, I would sometimes try to "sing along" to the passage he played.

The Yukult lady arrived, a little late, and made her sweet way through the lounge, as she did every day.  I felt bad to not buy a little carton of tangy yoghurt probiotic drink from her, but for some reason didn't. Food wasn't soothing my nerves.


I think some of the uneasiness, for me at least, was the fact that I was required to give a speech to the school at the end of the day.  I had tried to get out of this but Declan (the head of school) would not allow it, saying that no matter how long one is at Yamasa, one must address the faculty, student body and staff at the end of their stay.

I had worked on my speech two nights before, and gave it to Sugita Sensei to take a look.  He explained a few particle changes (of course!) and seemed to think well of the rest of the speech.

Time ticked on towards the end of the day.  The final teacher on Thursdays was a sensei that none of us liked.  She only had a two hour gig in our class every Thursday afternoon, but it was always very boring and she did not have good teaching, or listening skills.  She expected us to keep up with her, no matter how fast she spoke and without explanation.  It had annoyed me the week before when I asked to have a clearer explanation and she just rattled something off at full speed to me, and didn't try to break it down in any way.  I got mad enough that I actually excused myself and left the room.  Dave-san told me later that neither he nor a few others understood the task either.

As class came to a close and people looked like they were about to fall asleep, I brought out my large box of Sees gold wrapped lollypops (chocolate, vanilla, cafe latte and butterscotch) that I had brought from California and said Happy Thursday everyone!  Everyone, including the teacher, was ecstatic about this turn of events...and then it was time for me to give my speech.


Afterwards, I handed out Obama bumper stickers and pins to my close friends and they honored me by posing for this picture. 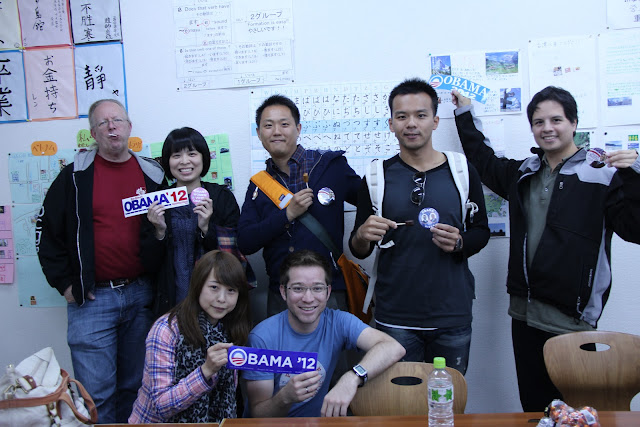 Although my uneasiness subsided for a bit, I still felt that things had changed.  People had already moved on a little in their minds from those three weeks together in which we lived in each other's back pockets.

More on the final evening and departure day in my next post.