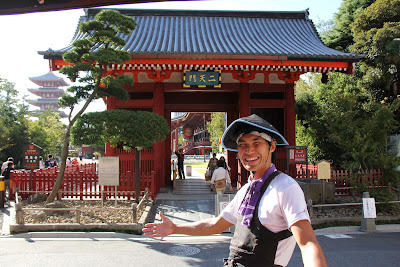 I wanted to take a break from studying and back track a little.  I meant to post this story about my last day in Tokyo.  I had quite an experience trying to find an ATM that would work for me on that Sunday and Monday before I headed to my language school.  On finally finding one, I decided to spend the last afternoon at a famed onsen on the man-made island of Odaiba.  I read long ago about The Oedo Onsen Monogatari, and though it was supposedly a little hokey, trying too hard to re-create an old Edo (Ancient Tokyo) experience, it still sounded like fun.  Having had no money in my pocket for two days ($13 dollars to my name in this non-credit card oriented city), I suddenly had a sense of freedom.  Before I hopped on the boat that would take me across the Sumida river to Odaiba, I decided to catch a very touristy Rickshaw ride around Asakusa.  I had been watching the Rickshaw drivers for the past three days and, like our American Firemen, the requirements seemed to be that they must be strong, friendly and handsome.  I couldn't resist this indulgence. 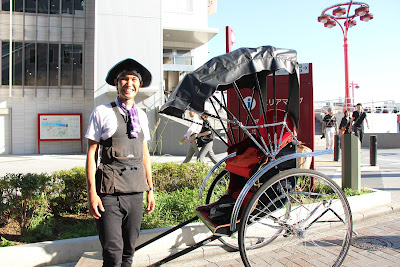 My driver's name was Yoshi and he had studied English for a summer at UC Davis.  He was great at plodding along the streets, pointing out historical detail that I hadn't researched myself, and keeping a conversation going.  When I told him that I was studying writing in a University program he said, "Oh, I am so honored! May I someday read your books?"  I said, "oh, yes, someday!" and we laughed.  I told him that I would probably write about Japan and he stopped the cart, turned around and said, "How very nice of you!"

He was a doll, and it was worth the price, just to talk and joke with this friendly guy...

Later, after a long boat ride, getting lost on  Odaiba island and heading in the wrong direction on the monorail I finally arrived at Oedo Onsen Monogatori, just as the sun was going down. 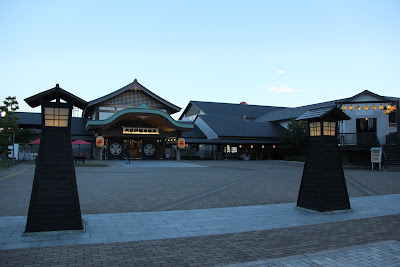 Although a "re-created" onsen (read, Las Vegas style) with a sand bath, a foot healing stream, 10 indoor baths, 8 outdoor baths, massage, salt scrubs, fish foot therapy, hot stone baths and a beautiful food and bar courtyard, it really is an amazing experience.  Of course, going out into the country side to experience a "real" onsen in the woods is the ideal, but if time doesn't allow, this is a fun option.


By the time I got there it was 5:30.  I was starving, so after getting dressed in my yukkata (simple cotton robe and obi (sash) provided by the onsen) I went into the food court, bought a big bowl of ramen and had a glass of shochu  (Japanese hard liquor)...actually I asked for a sake, but the way I asked she thought I meant this whisky-style drink because all alcohol is categorized under the term Osake.  Well, I wasn't too unhappy about the mix up!

By now, I was getting used to being the only Caucasian for miles, and decided that the best recipe for the discomfort of traveling alone like that and being a woman was to appear to be someone studying the culture.  Having a camera in hand and boldly taking pictures as if on a journalistic assignment seemed to work.  Of course, I never directly took a picture of a person, (except for the little girl below, but I asked her father if it was OK). I just got on with enjoying my time and not worrying too much how odd I appeared.

After my quick meal, I headed for the foot stream which was outside in a garden pavilion.  People were hiking up their yukkatas and gingerly walking in the stream.  The stream was embedded with small and then ever larger stones that were supposed to relieve your feet by poking at the pressure points gently.  It was hellishly sharp and I tried not to cry out when I walked over them.  I was one of three gaijin in the entire pavilion, and far be it from me to show that I was a baka gaijin who couldn't handle it.


So I waded all the way to the other end without tears and was quite proud of myself.  Next, I tried the Fish Therapy foot bath.  Apparently this is all the rage all over the world now.  These little fish eat the dead skin off your feet and your feet come out of the bath completely renewed.  They're happy, you're happy. 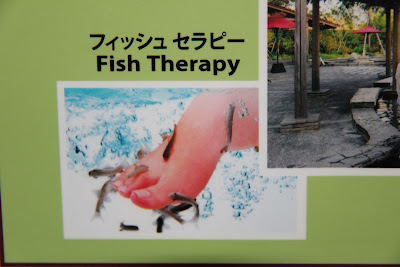 I sat in a little area of the pavilion with two other women who apparently had been sitting there for awhile.  A few little fish were swirling around their feet.  I put my feet gently in and instantly hundreds and hundreds of tiny fish swarmed my feet. It tickled and I tried not to look down because I was feeling very queasy suddenly.  The women laughed and nodded, like they knew how I felt.

I finally did look down after about two minutes...my feet were covered, like I had on fish boots and I was so terrified suddenly that I shrieked and pulled my feet out of the water.  The women continued to nod at me and I immediately stood up and went to the door.  The manager came to ask if I was alright and I said "Gomen nasai, sukijanai." I'm sorry, I don't like it.  He said, but you have 15 more minutes before they are finished! I bowed and made my exit, he bowed and kept trying to get me to sit down. Arigatou, doumo, doumo I said as I bowed myself out.

Finally, I headed to the baths.  The women's room was giant, the biggest indoor bath I've ever seen.  Multiple tubs of every temperature, with different minerals and salts, wet saunas, dry saunas, scrub rooms.  The rotemburo (outdoor bath) had a bamboo cover and the moon was out.  There was one large outdoor bath and then quite a few barrel baths, made for only one person at a time.

What I love about the Japanese bath culture is that it's just so natural.  Kids are with their moms, girl friends and middle-aged and old-lady friends are just hanging out, talking, laughing, relaxing.  I wish America wasn't so hung up on the naked body.  We could learn a lot from a culture that just hangs out naked together a lot.

I didn't leave the onsen until 11:00 pm.  In six hours I had oodles of time in the baths, a salt scrub, two meals, a glass of shucho and a half pint of beer...it's hard to leave that kind of paradise.
Posted by Julie C Graham at 7:20 AM