Inuyama Jo and the Big Test

Chen-san and Ro-san came again this evening (like they did last Tuesday) to study for tomorrow's big test.  Our test will be on using grammatical structures like "before I came, after I came, when I came, in order to have XXX become something else, (and, incase you are someone who actually happened on this blog because you study the language the まえに、いくとき、いたとき、と。。。いいですよ、どやて forms（ますぐいて、まがて, etc. like how to show someone on a map),  and the inevitable
。。。んです form which shows natural flow of communication but which DOES NOT come naturally since it uses the じしょ form but is often used within a formal context.）

Agggghhhhhhhh.... plus three chapters of vocabulary.  Here are my friends and I, feigning happiness while we study... 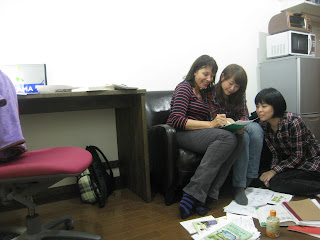 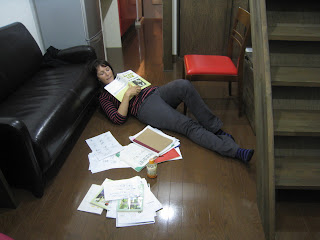 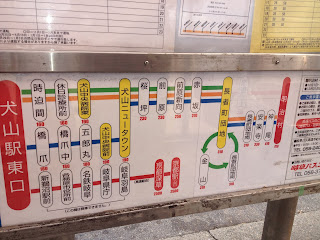 The trip to Matsumoto ended up not happening BTW.  We all met at the train station and I had concerns for all of us to try to go that far in a day and actually enjoy the trip- especially since someone told me the night before that the Ukiyo-e museum I was dying to see was not in the heart of the city but another 15 minute taxi ride away.  My Taiwanese friends are students with student budgets and I didn't want to force them to go on such an expensive trip, so we changed our minds at the train station and headed to Inuyama instead.  Inu means dog, and Yama means mountain.  The town is very charming and has the original castle intact (castles are called Jo, so Inuyama Jo).  It is the oldest castle in Japan, and is still privately owned by the same family that owned it since 1617.  The town was charming, the little street leading to the Jo not too touristy, (oh a little, but not like it is elsewhere) and the weather was fine.

If I was concerned that I would have to lead my group of Taiwanese friends and be the leader, I needn't have worried.  Ko-san, the only man, quickly took the lead and Ro and Chen-san instantly took the roles of being my nieces, calling me Julie-chan and aka-chan (Julie baby and little dear one) making sure that I was buying my ticket correctly, making sure I had a seat, holding my back pack for me while taking pictures.  I don't feel THAT much older than they are (but I am) and I kept telling them I was quite fine, I've traveled a lot, but I think the Taiwanese courtesy (much like the Japanese) is about taking care of others, always.  There was also a thing about them being Taiwanese and me being American that made them want to take care of me.  They don't know each other at all from before being at Yamasa.  But they have banned together to form a little Taiwanese group.  Ken-san bowed out since he's been to Inuyama before and wanted to save himself for the next day when he and Ko would head to Nagoya. 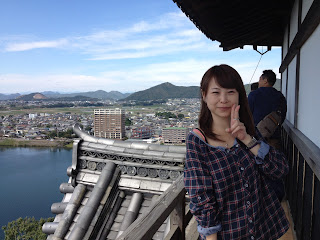 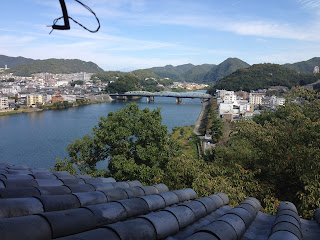 Inuyama Jo is situated perfectly for defense purposes, as these pictures show.   A beautiful and useful river behind, the valley stretching out far and wide below.

It was a great and LONG day, since we also went to a part of the town that was an architectural park from the Meiji period -- the Japanese moved hundreds of structures from around Japan to this park, representing various building styles going on at the time that Japan opened its doors to the west.  The European influence was phenomenal and one gets to walk through original buildings, including the front door of Frank Lloyd Wright's Imperial Hotel (which I forgot to get a picture of).    (BTW, in order to get there, we had to use our newly learned vocabulary about directions...) 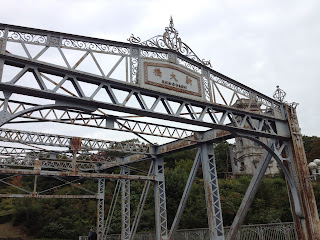 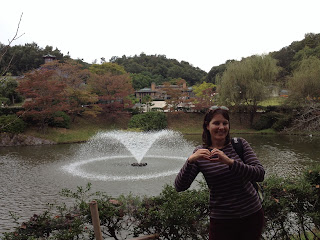 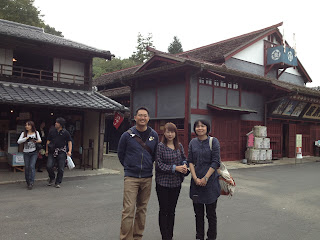 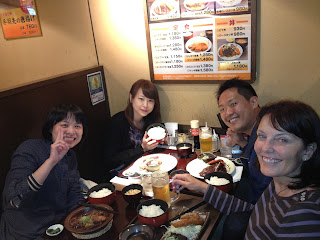 After the long day of walking around and speaking in our new language together, we were all very very tired.  We hopped a bus to Nagoya and sped through the night on a 90 minute journey, Chen-san sitting next to me, sharing her earphones so we could listen to music together, Ko-san in the seat right behind us, Ro-san right in front. We all fell asleep together bouncing along the highway. 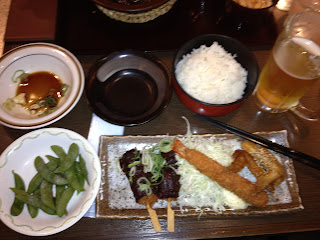 We arrived at Nagoya train station and then after a great dinner of Nagoya specialty barbecued chicken wings, pork tongetsu on a stick, rice and miso soup, our evening ended in a 5 story Japanese pharmacy (やっ清く)。.

Ko-san explained to me that Taiwanese are crazy for Japanese medicine.  The place was full of Taiwanese and Ro-san and Cho-san walked me through showing me all the special items that I must buy.  I did buy some vitamins (after checking the label - Ro-san swore by it) and some Japanese medicine plasters for aches and pains (which, I'm actually looking forward to trying).  Ko-san had already been there three times to buy presents for his family, so he waited outside.  When we were finished purchasing, we came out and he was gone.  We looked around a little nervously for a few minutes, then saw him running down the street towards us with a shopping bag.  "I'm so sorry!  I can't believe it!  I just bought a camera and I got such a good deal!"

The most amazing thing was that 90% of the time, we all spoke Japanese.  They can all speak a little English, and much better than they think they can, but we didn't try.  We practiced all of our vocab and grammar, taught each other new words, and just enjoyed each other's company.

There was a moment when we were all walking down the street, away from the lovely Inuyama Jo when I had a sudden pang in my heart.  I know now, from long experience, that these friends of mine may remain friends for awhile, but that because of time and circumstance we will drift apart.  I know that this time and place and feeling, the feeling of love when you open your heart to new people, when you let them in at the exact same moment that they are letting you in, is a precious and fleeting thing.  I know that when I was their age, I believed that you could hold on to that feeling forever, with the people you fell in love with.  And traveling does indeed allow you to fall in love more easily.  My new wonderful friends won't be in my life for long, and it's that recognition of really needing to hold on to a moment, the feeling of absolute love that has only the moment that it is given and no more that breaks my heart.  And yet, I wouldn't trade  this feeling for the whole world. 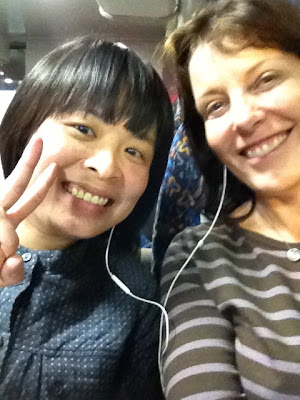