I have been in Okazaki for three days now.  It feels like much more than that.  I arrived on Tuesday afternoon, and after an awkward beginning, (I was picked up at the train station by a distractingly handsome staff member of the Yamasa institute and needless to say, the part of my brain that held what little Japanese I know and understand shut completely off in his presence. Luckily, I regained consciousness, somewhat, within about 15 minutes) I began to settle into my little apartment.  # 102 in Villa 5 -  a set of apartments (Villas 1-5) stacked next to each other about a 12 minute walk away from school.  I had to stock my apartment with goods (a couple of towels, detergent, a bowl, a plate, a cup some paper towels, a pair of hashi, some food and drinks etc. ) from the local department store.   The department store is about 15 minutes walk each way as well so between school and supplying my "pad" I've been getting plenty of exercise.

The apartment is small, but has everything one could need.  A futon loft, a galley kitchen, a separate toilet room and bath room (with a separate shower and deep japanese tub in which to relax), a study space by the window (I use the bar above it as a drying rack for my clothes...the place includes a washing machine)... 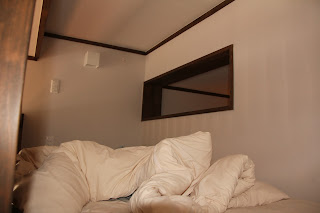 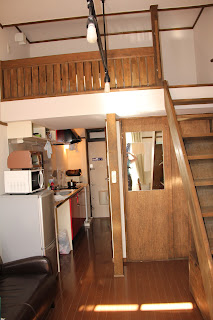 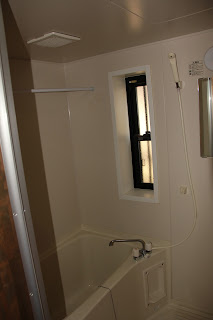 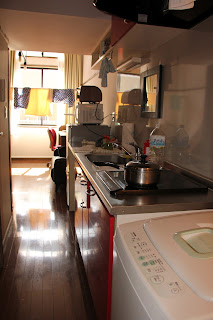 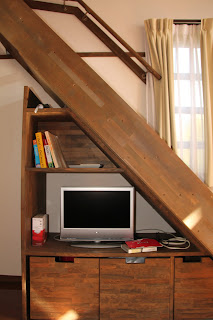 The first day of school was Thursday.  I was nervous but knew it was just orientation day.  Nothing could go wrong really.  At the school there is a cross walk where a staff member (not MY staff member though) stands and waits for the students, like a crossing guard at an elementary school. He wears a shirt and tie and black pants.  He holds up a sign and slightly bows and shows you the way to get across the street.  There are never any cars coming at all - this is just a courtesy.

(I have been getting good at returning that kind of bow with just the right bow.  It's more a nod of the head, the lips pressed together tightly, almost smiling but not so much.  The head goes down quickly, as does the other person's head.  Nothing formal, just keep walking.  One might add in a Konnichiwa or a Ohayougozaimasu for emphasis (good day or good morning) but not necessary.)

I walked into the classroom to see a gentleman of about my age and two younger Taiwanese women.  The teacher talked with us about where we are from and what our hobbies are, about our work and such.  She was looking for oral skills and also helping us to get to know one another.  After this a long test was issued and we began.  During the test at some point we were pulled out for more oral testing.  When my time came I dropped a lot of particles and often forgot to put sentences in the past tense when I was talking about my trip to Tokyo.

In the end I was put into what she said was a beginning intermediate class.  Turns out all four of us were put into the same class.  This is unusual because often the students attending have great disparity in skills and proficiency.

The male student, Dave is from Vancouver.  We hung out afterwards and he was kind enough to send me all sorts of links for studying and app recommendations.  Everyone here is very kind and so helpful to each other.

I have to admit that i came home from the super market (after Dave and I parted I headed to get a bento box dinner and a beer) I felt very depressed.  I can't quite make out why.  I think mostly because I feel so insignificant here in a way. Everyone else is here for a month, two months, 6 months, a year.  When I tell people that i'm here for only 2 weeks, it's kind of like why am I bothering? In fact, I feel like the only way to make this trip worth while is to stay for an extra week (three weeks total) so I can get just a heftier amount out of the whole course.  But that probably won't be possible...

The head of school, Declan Murphy, told us later during orientation, that we are required to give a parting speech at the end of our stay.  My heart sunk to my feet.  How ridiculous for me to do that, when others have been here for months!  I am nothing here, not even noticeable.  I told him that must not apply to me.  He said, no it's required of everyone.  Somehow all of this made me go unconscious at about 8:00.  It's been about 10 years since I fell asleep that early.

The next day was today, the first day of class.  I walked to the school and a different staff member (still not MY staff member) was there as a crossing guard.  Doki doki shimshita!  I was nervous! I was entering an ongoing class with people who had been studying there for a long time.  How would I keep up?  I didn't even have the same vocabulary because I've been using a different text book for years.  I dreaded the intensity.  I dreaded having to reveal just how awful I am at this.  Why did I come all this way to be humiliated?  I knew i would have to title my next blog "A lesson in Humiliation."

It helped that Dave-san, Chen-san, and Ro-san were all entering as newbies too.  And it also helped that everyone else in the class is about 23 years old and were all so delightfully easy going.  There's Ken-san from Tiawan, Montero-san from Brazil, Lina-san from Russia, Go-san from Tiawan and Peter-san from New York.  We worked for three hours on the potential form in conversation.  And I never felt at any time that I couldn't keep up.  Three hours passed so quickly. (It's only a half day on Fridays, because they want people to get out and tour around Japan on the weekends.)

After class, Go-san, Montero-san Dave-san and I went to lunch at the cantina next to the school, the Sakura house.  The coffee shop area is called Kitsutsuki (The Wood Pecker) with a bar and television and handful of tables.  Go-san was the most talkative, and we all spoke in Japanese as much as possible.  I realized that this is what I've really wanted all along, to just find people to speak Japanese with, constantly.  To have it as a part of my daily life.   I'm about to experience that for the next 14 days.