Sunday, I woke to new stories of Typhoon Jelawat heading towards the city.  My plans had been to try to go to a Swing Dance class in another part of Tokyo (The Tokyo Swing Dance Society has classes in English on Sundays!) then get a boat to Odaiba, a section of Tokyo across the river and spend the rest of the day at the famous Oedo Onsen (bathhouse).  When I asked the receptionist at the desk about the typhoon, she said  (after checking with her manager and also a long research on the computer) that the typhoon was set to hit at about 2:00 so I better be back by 12:00.  There went my plans.

I also needed to buy some essentials and she said I should go to the Sky Tree mall - I had no idea there was a mall there, so why not kill two birds, as they say? 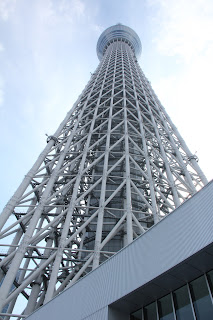 The ride there was easy, just one subway stop away.  Getting out of the station the tower is just above and is literally breathtaking.

Standing in line at the Sky Tree Tower, I kept asking myself, is it worth it?  I have been way up in high buildings before.  I’ve seen city views in Florence, San Francisco, Los Angeles, New York.  But there was an energy that surrounded Tokyo Sky Tree that was undeniable.  The crowds, almost entirely Japanese, were determined, excited and in great spirits. The family behind me played an endless game of Ro-Sham-Bo (though it was called something else) where the father yelled the last word explosively and let out a booming laugh at the end of each and every match.  This delighted the kids, but after about 20 minutes, not me so much.

There was plenty of information to listen to, watch and read as we wound our way through the halls.  Brochures in hand and videos showing the “making of” Sky Tree, one couldn’t miss learning all about it.  The building is 634 meters high, currently the tallest in the world (though, wouldn’t you know it? Shangahi is building something 636 meters right now).

The design is sleek and ends with a five story pagoda.  Even the two colors they’ve chosen to dress it up at night are traditional Japanese colors that come from the Japanese color pallete known as aijiro – these colors were used hundreds of years ago in cloth dying which was established in 603 by Prince Shōtoku and based on the five Chinese elements.  In this system, rank and social hierarchy were displayed and determined by certain colors.  The blue is called skldjfdsklfjds and represents not only the Sumida River (which winds through Tokyo) but Iki, the manly sprit of urban Edo (Tokyo), its “full strength and intrepid spirit.”  When the tower shines blue, it is only the core of the structure that lights up.

Every other evening the tower is glamorously purple with glints of golden light, describing for all to see the color Edo-murusaki (royal purple), representing the traditional aesthetics of Japan called Miyabi.  The miyabi lighting shows off the structure of the tower.  And every night a light encircles the tower over and over again showing the passing of time as the light form the tower beams up to the sky to express the hopes and dreams of the people of Japan.

I had been admiring the tower from my hotel room every night and it was fun to learn the specifics and the importance of every detail.

Before we get lost in the elegance of the tower though, this is contemporary Japan after all, so along with the traditional anjiro and delicate balance of male and female representation,  we also need to know that a special and official Character has been created for the Sky Tree as well:  Sorakara-chan! Sorakara-chan is a young girl with a star shaped head who descended from the skies to Tokyo Sky tree.  She sticks around Skytree to tell visitors about the delights of the tower.

There are also other characters, friends of Sorakara-chan:

Sukoburuburu: An old dog bred in shitamachi, the Tokyo traditional town area
Teppenpen: A penguin girl who has a weakness for new fads and fashions.
Once up there,  (riding an elevator with beautifully designed mirrors reflecting cherry blossoms and traveling at 600 meters per minute) it was fun to see how far Tokyo stretches, but without a great knowledge of neighborhoods (I saw the temple in Akasuka right away, however) it looked like infinite buildings reaching as far as the eye can see.  Everyone else was getting a kick out of picking out different areas.  I got a coffee, strolled a little  then left after about 30  minutes.

Was it worth it?  In a way.   It’s truly something to say you’ve been to the top of the tallest building in the world.  But to me, the great reward is looking upon it from afar. In the daytime, seeing its presence towering over new Tokyo and old.  And in the evening, admiring  its manly blue, its dazzling purple as it extends straight up to the night sky.  That’s when the Tokyo Sky Tree Tower delights.