Day in the Life of a Nihongo Student

I just finished my first week of study.  5 hours a day of only Nihongo (plus two hours a week of private lessons) is just about the most fun I've had in in a very long time.  My class is a group of 10, a little over their normal limit, but I think since we are all at exactly the same level, they want to keep us together and not split us up into smaller groups.  I really like the bigger group.  I'm used to a small class (only 2 or 3 students) -- this larger group has an energy and dynamic that feels already like we're family. That pushes us all forward together, and we don't seem to want to separate even at lunch or after class...

Ko-san, Ken-san, Hon-san, Ro-san and Chen-san are all from Taiwan.  All are looking to better their future by working for Japanese companies or work in Chinese companies with Japanese bosses.  Montero-san is from Brazil.  From my understanding, his grandparents live in Japan (and are Japanese?) and he's been living with them while studying (I just learned today that his real name is Luan Suehara de Oliviera Montero.  Cool!)   Dave-san is a Canadian who, like me, has no really good reason to study but does it just for the love of the language.  Lina is from Russia and I haven't had a chance to ask her yet why she's here.

Our classes start out each morning with a review of the homework and study of the day before.   Then new grammar forms are introduced and we study it together and try to converse for the rest of the day using the new structure, mostly using role play.  This practice is truly helpful. The sensei walks around and listens, corrects us and we are to ask questions of her if we get stuck.

Yesterday was a two hour test based on four chapters of our text books, 20 minutes of which was an oral exam.  I was glad to see that I wasn't the last one finished with the massive written component.  In fact, we all finished at about the same time.  The Taiwanese students have a significant advantage over the rest of us since they can easily read Kanji, and I believe they all scored better on the written test than the rest of us.  My score, for the record, was 80% written and 90% oral.  I honestly thought it would be the other way around.  Well, there's nothing wrong with a B during your first week in an immersion program!

It's really fun to be part of this group of late 20 year olds.  There is such a different energy than what I'm used to.  Some of them live together in the Student Village - where they have more of a communal atmosphere.  They cook together, and hang out, but i get the impression that it's a little rough.  The others have apartments near mine.

Last Friday a bunch of us got shuttled over to the local Department store (basically about 8 stores in one huge building).  Some of the students were from the AIJC program, a long term academic study program. They were all in the shuttle (driven by the director of the school, Declan Murphy) to get cooking tools and futons.  That was fun.  I just went along for the ride and Dave-san came too and we just tagged along with the young-uns.  I ended up buying a takiyaki maker (octopus dumpling balls, however I will use shrimp!) and a tamago pan (for the delicious egg dish I have every day).

Dave is about my age, from Canada.  Otherwise it's all young people and I really love being around them.  It makes me feel young too...

Today we each got to be the owner of a company hiring someone for a job.  (Today was the only day so far that had anything to do with business.  The rest of the week was all about daily life.)
Because the grammar structure we are learning is actually just about third grade material, I thought it was appropriate that we spent a half hour drawing posters with brightly colored paper and markers to encourage people to work for our company.  My partner and I owned a zoo and needed a maintenance person.


Then we interviewed for positions.  Our teacher actually had half the group as the joushi (boss) and the other half of us had to exit the room, enter the room bowing, approach the boss and use proper manners during the whole interview.  How fun! I have no interest, really, in the vocabulary  (goods, overtime, bonus, salary, etc.) but the whole experience of interviewing Japanese style was great. 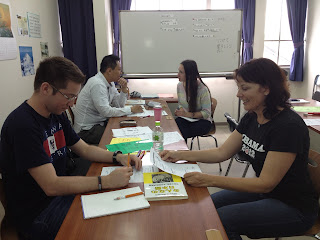 Today Ken-san (during our interview), asked me about my husband and kids.  I told him I didn't have a husband but I had kids that I missed very much.  Ken-san is the tough kid in the class, the one who comes in every morning looking like he had a bit of partying the night before.  He would be a textbook gangstah in any hollywood movie.  He looked at me for a long time then said, "how old are you?"  I thought it was part of the interview and I said, "does it matter for the job?"  He twinkled..."Oh...Secret!" in English.  We laughed. "Yes, Secret" I replied.