"Miso" is a slow-fermented soybean paste with a strong salty flavor, and forms one of the bases of Japanese cooking. Very versatile, it is used in sauces, with meats, fish, vegetables, tofu, but above all in Miso Soup, a part of the staple diet of Japanese and as common as rice. Breakfast is not breakfast without miso-shiro (miso soup), and it has entered into many sayings...for example, "ore no miso shiro wo tsukutte kureru?" or "will you make my miso soup?" meaning "Will you marry me?" Several types exist - white and red being the main varieties - and every region of the country has its peculiar method of producing miso. Miso is made by fermenting soybeans with water, and while some types include other ingredients such as rice, Hatcho Miso is renowned for its traditional method of production (unchanged for at least 500 years) and distinctive taste and color.

History:
Hatcho Miso is made by the Hatcho Miso Company in Hatcho, or Eighth Street, of Okazaki. Hatcho Miso is famous for the same reason that Okazaki is famous: Tokugawa Ieyasu. Apparently having a liking for miso soup made with hatcho miso (or so the company says), Tokugawa Ieyasu made sure that his armies were supplied with the local bean paste. Being very long lasting, very high in protein, energy and other nutrients, Hatcho Miso is an ideal trail food. Having Conquered Japan, Tokugawa moved the capital of Japan from Kyoto to Edo (no Tokyo), and continued to have Hatcho Miso shipped to his castle there. The Hatcho Miso Company became famous as purveyors to the Shogun and later gained even more prestige as purveyors to the Emperor.

Hatcho Miso is darker red and earthier flavored (almost like a rich beef broth) than any other Miso soup I've tried.  It is world renowned for it's flavor but also because the process has remanined unchanged and there are no additives.  The beans are shipped from Hokkaido, washed, scored so that the bean opens up, then salted and sprayed with the local bacteria, that is unique to the region.  The beans are then put in huge 8 foot tall vats, pressed down with hundreds of river rocks, then allowed to sit for two and a half years to ferment.

We were all dying to go on a tour of the place and go through the tasting room.  By the time we arrived there was only one tour left and although the tour guide didn't speak English, it was easy to understand the gist of the story. How the soybeans were transported in the old days, how the laborers crushed the beans by hand, and hauled them up to rafters for first fermentation, then later packed them so tightly in the cedar vats so no air could get in or out. 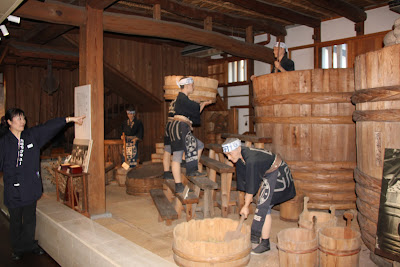 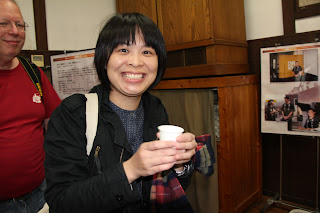 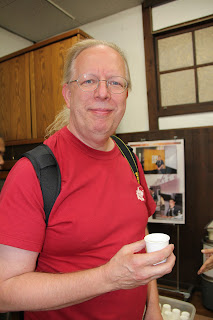 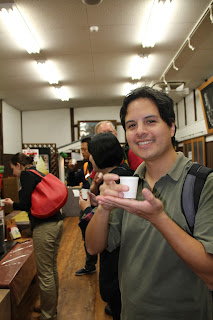 I don't have a picture but there is also Miso Ice Cream, which was delicious and Miso beer...(they weren't tasting that at the time however...Snap.

The cool thing about Hatcho Miso is that it is so super probiotic that people swear by it as a medicinal food, as well as being high in protein, fiber and vitamins.  It is also famed for its ability to prevent or alleviate (??) radiation poisoning.  After Chernobyl, 40,000 tons of Hatcho Miso was ordered by Russians and Europeans.

The day ended at a local Okinomiyaki restaurant.  A few beers, a shrimp Okinomiyaki for me, and some laughs at the end of the day were a good send off. 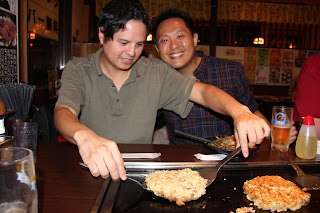 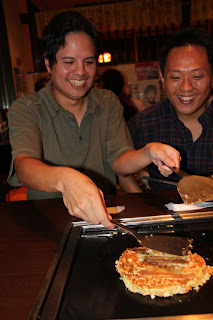 At the end of the evening, it was just me and the boys.  Lina and Chen left earlier.  We stood outside of the Okinomiyaki place and chatted for awhile about class, teachers, Yamasa in general.  I felt the continents diving again.  The goodbyes were short, a quick hug, a "please write, let's Skype, let's stay in touch! Please!"  and yet...it was the end.

My apartment was 15 minutes away.  I was used to the walks, day and night, and I headed back.  The men were on their bikes all going different directions.

I took everything in as I walked.  The Volvo dealership.  The little mom and pop shops that lined the street.  The giant funeral parlor with a big purple neon sign reading in both English and Japanese "Tear."  Everything looked like Anime; over-bright.

My apartment seemed empty when I returned.  I cried a little, packed a little, cried a little more.  I ended up going over to Chen and Ro-sans apartment, needing company and to say goodbye just one more time.  We sat for awhile and chatted- gossiped about a love affair we believed to be happening in class...  And then it really was time for me to say goodbye for good.

I went home, drank my final Suntory Malt beer (how I wish they sold those in America!) and watched a Japanese game show, now not so bizarre to me.  Well, this one was a little more normal than some -- or was it beginning to seem normal to have the wild music, crayola subtitles and loud gasps "heeeeeeeyyyyy????????" emit from the audience every 10 seconds.  I didn't know, I just sat back and enjoyed my last two hours of "showering" my brain with Japanese.

Then I climbed the loft up to my futon and stared at the ceiling conjugating verbs until I fell asleep.

The next morning was a pleasant goodbye at the Yamasa Office. I brought Sees Candy Lollypops and orange foil pumpkin wrapped chocolate balls - what I thought would be novel to Japan --little did I know Halloween has taken Japan by storm.  But Sees Candy is Sees Candy after all, and famous in it's own right.  The front desk woman took the candy from me and announced that I had brought yumena California no okashi (famous California candy).  The staff was a little surprised, and I don't know if it was because I am the customer bringing something for them.  But I was truly thankful for all that they had done and how amazing their service was.  Of course I didn't have the right vocabulary to explain that, but I think the candy showed how I felt.

My favorite office worker ran to get my wi-fi deposit and then walked me out of the building saying goodbye and he hoped he would see me again.. I plan on returning next year and I told him so.  A nice way to end my stay at Yamasa with him watching over me as I made my way to the train station.

As I headed up to the Okazaki station, which I knew so well by now (even knowing which platforms headed where, and how much money I would need for each stop without having to read the map), I watched older women in kimono buying coffee and young artist types with odd hair cuts reading the unfathomable newspaper.  I didn't belong there, but I didn't not belong.  I was not an outsider in the way I was three weeks ago.  I shopped at the same grocery store, made dinner and breakfast every night in my kitchen, hung my laundry out to dry, just like they did.  I put up with the local election megaphone trucks that roamed the streets each afternoon yelling out political slogans, sat mindlessly drinking a beer in my living room letting Japanese television dramas wash over me, just like they did. I was greeted by charming business suited crossing guards every morning on the way to school - one stationed at each corner of the least busy streets imaginable, and I dodged battalions of after school bike riding children in their school uniforms every afternoon, just like they did.

I was outside of the culture but had been able to somehow enter it, one layer deep.  Like the language itself, every layer revealed more complexity, more flavor, more joy and yet more frustration for me because I had a deeper understanding now that I had not "arrived."  How did I ever think that three weeks immersion would get me closer to my beloved adopted language and culture?  In fact it took me further away from it because now I could see just how far there was yet to go, how many layers there were to peel back.  And the layers seem infinite.  And yet even knowing this makes the pursuit seem sweeter somehow. 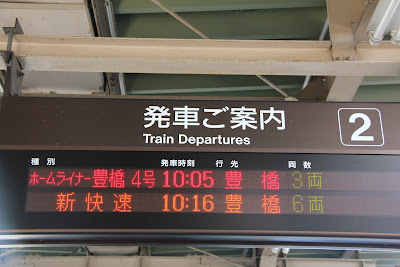 I waited alone, truly alone for the first time in one month, on the train platform waiting for the train that would take me to Nagoya and then another Shinkansen on to Tokyo.  I know I'll be back.  Girl leaves Okazaki.  But not for long. So I won't say sayonara.  I will just say Mata rainen, ne? (Next year again, right?) 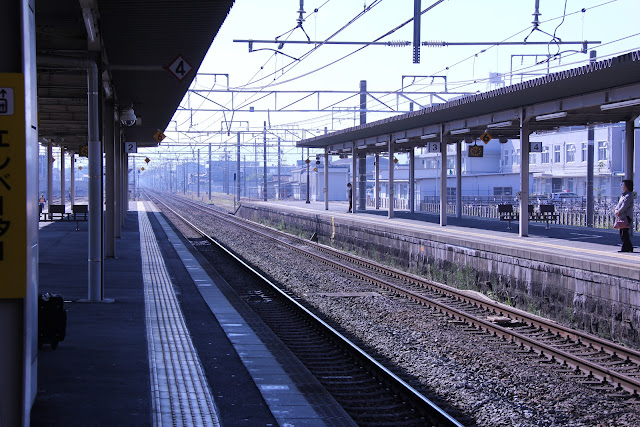