Last Wednesday the kids and I went to see Jake Shimabukuro at Zipper Hall, downtown Los Angeles.  It was an amazing show.  A Ukulele concert?  Jake who?

I have a fondness for Jake for many reasons.  First of all, he's a true virtuoso.  No one has ever even come close to doing what he does on a ukulele.   I say that as if I've studied it for years -- I haven't, but everyone seems to agree that he's taken the instrument to the next level.

I also have a fondness for his music because it got me through a particularly rough patch last summer when I was going through a lot, emotionally.  I discovered his music while on the island of Kauai.  He had just come out with his CD "Peace, Love and Ukulele."  I thought the title was oh so Hawaiian in the way that it was all groovy and laid back.  But the music was absolutely beyond anything I'd ever heard.  I played that CD about 30 times in five days as I drove up and down highway 56 from Wailea to Hanalei.   His music was magical, transportive and ultimately, healing.

During the concert he talked to the audience a lot.  Every song had a story -- he was charming!  The evening was hosted by the Asian Youth Symphony Society and the place was packed with admiring Japanese.  Jake is a Hawaiian boy through and through, but he is also very connected to his Japanese heritage.  His piece titled "Go for Broke" honored the 442nd regimen during WWII.  This regimen was the most highly decorated (21 Medals of Honor) in the U.S. Army and was mostly made up of Japanese Americans.  "Go for Broke" is a pigeon English term that was used at gambling halls in Hawaii that meant (as it still does) "go for it"  "all in," etc.

Jake thoughtfully peppered his commentary with "Yoroshiku onegaishimasu" (a polite phrase which is asking the favor of the listener to please keep the speaker in the highest regard)  and that seemed to thrill the audience.

I really can't say which of his amazing pieces delighted me the most.  Of course he is famous for Queen's "Bohemian Rhapsody" and the Beatles, "While My Guitar Gently Weeps."  But his Spanish Guitar piece, his blues pieces were wonderful too.  Perhaps the most amazing song of the evening was "Sakura, Sakura" in which he made his 4 string uke sound like a 12 string Koto.  He told the story of hearing Sakura Sakura during a Koto concert and he locked himself in his room for days until he could get close to replicating the sound with his instrument.

I got to meet him after the concert.  I was the second to last person in the autograph line  -- luckily someone came behind me who was willing to take pictures!  I was so nervous to even do this but my daughter made me do it.  She even had the bright idea to get the car, pull it around in front and park in the loading zone so that by the time I got back the line would be shorter.  She said, "he's one of your heroes mom!  You should definitely do this!  You'll always regret not talking to him and getting his autograph."  (Go for Broke???)

When I did finally get up to see him, I told him his music had meant a lot to me last summer - that I was going through a tough time and that I had picked up his CD out of the blue.  I said that I had listened to it non-stop for while in Kauai and for weeks afterwards.  He was really lovely and listened intently.

My daughter was right.  I would have regretted not getting to meet him.  It was an honor. 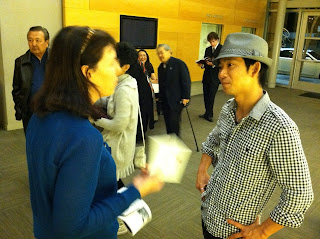 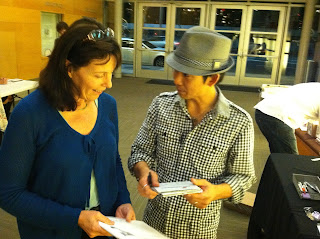 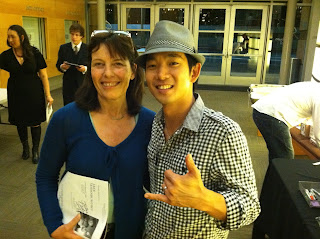