A couple of fun things.  I was at the pet store and an older man in front of me had a dog for the hard of hearing.  I was looking at the sweet face of this very young German Shepard and reading her vest.  She began to sniff my shoes and the man turned to her and said, "Dame te yo!" I heard it at first as "Stop That!" in Japanese, but instantly realized it couldn't be that, it must be the dog's name, "Dameteyo."  What an odd name, I thought.  It must be Italian or something.  Then the man finished his purchase turned to the dog and said, "Ikimasho!" (Let's go!) The dog jumped up and they went out to the car.

When I went outside, they were still getting in their car.  I said, "Anata no inu wa nihongo wakarimasuka?"  He said, "Eh?"  Of course, he was hard of hearing!  I repeated it and he answered in perfect Japanese, Do you speak Japanese?"  I answered, "a little, but I am not yet skilled." (sukoshi, mada jouzu jaarimasen). 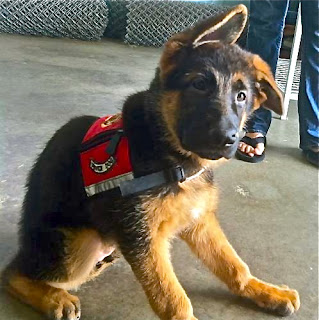 The dog's name is Kagemusha, or Shadow Warrior. The gentleman was very eager to see my reaction. It won't surprise you that that is the title of a Kurosawa film.  Because that's the way the universe works!


Am thinking of taking classes in the spring at SMJC to up my Japanese language skills.  I love my Tuesday night class, but am at the point where i really need to take it to the next level if I'm going to move forward in this language.  Have read a few words of encouragement from other online language learners, especially from the site AJATT.  (All Japanese All The Time).  It was heartening to see, oddly, that other students of the language have felt as frustrated as I have at making progress.  I might just join that sight and another online kanji learning center.