In America, we call them J-Dramas.   In Japan they just call them "Dorama."  (In Japanese  every consonant except the sound for "n" has a vowel sound following it.  Sometimes the vowel sound itself is dropped in the pronunciation, like the word "desu" [it is] - which is pronounced "des," -- so instead of drama they say dorama.  (ドラマ). )

The second season was just aired this April, and to say it has the status that "Mad Men" has in this country is an understatement.  The first season of "Jin" was produced in 2009.  The second season took two years to produce and was broadcast in 80 countries last April.  I missed it, and didn't even know about it until I saw a big spread about it in a local Japanese monthly mag.  The production values are amazing and it's subarashi すばらしand very sugoi すごい (wonderful and cool!)  and totally fun (totemo tanoshi desu とてもたのしです） Here's the premise:

A brain surgeon, Dr. Jin Minakata  Tokyo is asked to operate on a specialty case at the hospital in Tokyo.  Problem is, he doesn't want to take on the case because he has messed up on a very important case (I won't tell you what) and he doesn't trust himself to do this one correctly -- now he only takes on "normal" brain surgery cases.  (Ha!)  Finally, of course, he agrees to do the brain surgery but he keeps getting these terrible headaches that practically make him fall over, yet uber-surgeon that he is, he continues on at all costs.  And what does he find inside the brain of the patient?  A large tumor.  As he pulls it out, guess what?  It resembles a human fetus!

O.K., so far this is typical J-weird.  I love that about the Japanese  culture though, they just go for it no matter how "out there."   So handsome Dr.  Minakata (Minakata sensei is what the other doctors call him - みにかたせんせい)、completes the surgery and they put the "tumor" in the lab in a jar.  A few things happen and Minakata sensei is caught in a Timu-Slipu (a time slip), falling into 1862  Edo.  Old Edo was the name of Tokyo under the Shogun.

This all might sound pretty hokey  but I'm not posting the real details of the story because I'm worried that someone on this blog might actually want to see this show - it is truly amazing with plenty of twists and turns --  and brilliantly cast - so I am going to post the actual story line on a different post so that if you want to catch it yourself this won't spoil it.

I watched it online at http://www.dramacrazy.net/japanese-drama/jin-episode-1/# . If you check it out, the way it's set up is in parts, so every 15 minutes the section ends and you have to click out of full screen mode and then click on the "watch next part."  And of course it's subtitled.

The production is gorgeous, which is why I think it took two years to make the second season.  It has a wonderful sound track too, and I learned that there is a fan club in Japan just for its sound track.  Oh those Otaku!  (おたく - people with an obsession for something, usually reserved for anime or manga fans).

The reason I'm writing this on my blog is not just because I'm now officially a Jin Otaku, and not just because Takao Osawa is completely winning (and terribly crush-worthy) as the bewildered but earnest  doctor but also because  since I've been watching Jin, my language skills have gotten so much better! Even my own sensei (Toyoko) asked me what had happened, why was I suddenly speaking so well?

Although Minakata finds himself in a different time and the people of that time are talking in a very "high Japanese" manner with great formality, Minakata himself still talks in contemporary language most of the time.  I guess it would be like a time travel show where an American lands in Shakespeare's England.

Without giving anything away, I can tell you that the cast is wonderful and the story line is hugely engaging.  My other favorite, Masaaki Uchino, reminds me of Toshiro Mifune when he played buffoonish characters with big hearts.

If you have time to watch episode one, let me know what you think... 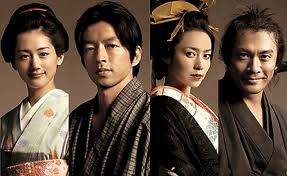